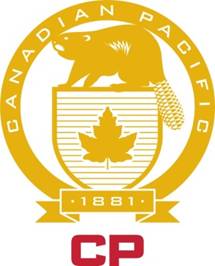 Based in Calgary, Alberta, CPR has been connecting Canadian businesses and consumers to the world since 1881. CPR’s high-density mainline network serves major Canadian ports and cities from Montreal to Vancouver, and key centres in the U.S. Midwest and Northeast. Its Vancouver-Chicago corridor provides shippers with the most direct route between these two key transportation centres, while its Montreal-Chicago corridor is part of the most direct route from Europe to the U.S. Midwest

With its recent purchase of the Central Maine & Quebec Railway, CP makes its return to Atlantic Canada; the expansion of CP’s network more directly and effectively connects Atlantic Canada to Montreal, Toronto, and the U.S. Midwest (Chicago, Minneapolis and Kansas City).

CPR serves virtually every major industry, from the resource-based industries of the West, to the manufacturing bases and consumer markets in central Canada and the northern U.S. Main commodities include grain, coal, lumber and potash, but also include many everyday products such as cars, household appliances, food and furniture.